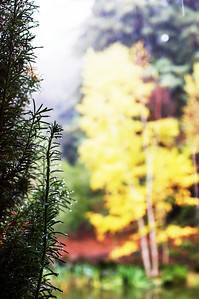 This is another from the wedding we attended last weekend. I got this image during the cocktail period between the ceremony and reception, while the space was being converted for dinner and the wedding party were off taking pictures. Unfortunately for the bride and groom, it had been raining all weekend, which meant that their plans for an outdoor wedding had to be altered. For most of the guests, though, it was actually quite nice, as the rain made for a cozy feeling indoors and some beautiful scenes outdoors.

What I love about this image is the painterly quality of the bokeh. When I look at the tree in the background, it almost looks like something one of the impressionists might have created.

Thoughts for improvement: As I mentioned, I absolutely love the bokeh here. I'm not sure about the composition, though. When I took the shot I was mainly interested in the drops of water on the tree in the foreground, and had taken several closer shots to focus more clearly on them. Here I was trying to get both the drops and the tree in the background in the same frame, but I think it might have been better to just pick one or the other.